Hot Tubbing Improves Autism Symptoms. This news will be surprise news for many parents whose children suffer from autism.

In a new study,  immune system regulation was linked to hot water bathing. Researchers have discovered that soaking in a 102-degree hot tub can improve the social behavior of children with autism, another in a long line of scientific confirmation of health benefits from hot tubbing.

The improvement is similar to behavior changes when children have a fever, widely reported by parents. The researchers say the heat triggers the body’s release of anti-inflammatory signals. Inflammation that results from an overactive immune system is linked to autism.
Autism is a developmental disorder that appears in the first 3 years of life, and affects the brain’s normal development of social and communication skills.  It is not a disease. The symptoms can be very traumatic for parents and their children who have been diagnosed with autism.

In another study by the same researchers, adults who swallowed whipworm eggs experienced improved symptoms – apparently because the presence of the harmless worms improves immune system regulation and reduces inflammation. 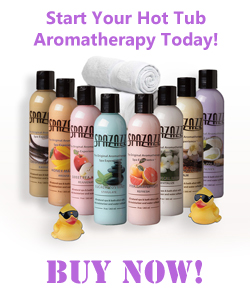 The results validate earlier reports that about one-third of people with autism show an improvement in symptoms when they are running a fever.

“Parents have said when their child got fevers, they see a marked improvement in autism,” said Rob Ring, Ph.D., chief science officer of Autism Speaks. “This has been reported for years. This study is just one angle you can take experimentally to get at whether this is a true response.”

“We found these individuals had less discomfort associated with a deviation in their expectations,” Hollander told PsychCentral, an online mental health and psychology network. “They were less likely to have a temper tantrum or act out.”

The study was small, but the results were deemed valid enough to warrant further study. And, that’s really good news for all those who suffer from autism.

Treat yourself and your family!

Hot tubs are in stock, on sale and ready for Holiday delivery!

Our February Specials are LOVE at first sight!

Act now and save thousands on your hot tub purchase.