Watch the Meteor Shower From Your Hot Spring Spa Tonight! 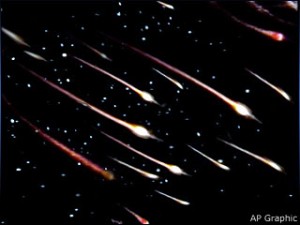 Hot tub soakers & stargazers this is your night! Avid astronomy fans are planning to look up and search the skies for this month’s Orionid meteor showers. Occurring from October 17th through October 25th, there is some disagreement among scientists about the peak-was it last night or tonight? Either way, you’re in for a treat.  You may not see anything as dramatic as the photo here, but if the skies are clear you’ll see plenty of meteors aka “shooting stars”.

The Orionids are one of the most watched meteor showers of the year. They are the result of debris left behind by Halley’s Comet in 1986. They are called Orionid meteor showers because they appear to shoot from a point in the constellation Orion, the hunter.

This easily spotted constellation “kind of looks like an hourglass with a very recognizable belt of stars,” said astronomer Mark Hammergren of the Adler Planetarium in Chicago. In addition, “the constellation is visible from pretty much anywhere in the world, because it appears along a line of sight close to the Equator,” he said.

Orionids are most visible after midnight from October 20th through the 25th. There will be little moonlight under an early-setting, waxing crescent moon, making for dark skies and a wonderful viewing experience. Hopefully the skies over Puget Sound will be clear enough to see them. The best viewing time will be after midnight in the eastward sky. Since meteor showers are wider than Earth, they may actually appear all over the sky-wouldn’t that be exciting? Something to wait up for!

So grab your towels, beverage of choice (non-alcoholic, please) and head out to your Hot Spring Spa tonight. Seeing a meteor shower is a real treat and makes you feel like you’re part of a great universe. Guaranteed to “make your night”!

Sanum per Aqua. Latin for Health through water.